5 July
The ANT is the chief focus for visual attention in the first half of July, as its radiant area moves steadily through eastern Sagittarius, then across northern Capricornus into southwest Aquarius. ZHRs for most of the month should be  2 to 3. For about a week around July 10, low activity may be observed from the July-Pegasids (175 JPE), this year in moonlit skies.
After mid-July the large ANT radiant area overlaps that of the minor -Capricornids (001 CAP) into August, but the lower apparent velocity of the CAP allows observers to separate the two. The stronger and faster Southern -Aquariids (005 SDA) should be distinguishable from the ANT as well. Finally, the radiant of the Piscis Austrinids (183 PAU) is distant enough from the ANT area. Association of meteors with one of the three radiants should be reliably possible particularly from the southern hemisphere. The highest rates are due on July 27 (PAU) and July 30 (CAP, SDA), respectively.
On 2016 July 28 at 00h07m UT ( = 125 :132) the July -Draconids (184 GDR) produced an outburst detected by radar and video observations (Molau et al., 2016b). The same position is reached again on 2022 July 28 near 17h UT, worth checking in case something may be observable around this time { although there was no activity observed in 2017 { 2020 (2021 still to come).
The radiant is at  = 280,  = +51, and the meteors have low speed (V1 = 27 km/s). 12 IMO INFO(3-21)
Full Moon on August 12 will badly affect optical observations of the Perseid (007 PER) activity around their maximum. The timing of the nodal maximum at  = 140 :0 (2022 August 13, shortly after 01h UT) favours west European locations. The moon in Aquarius perhaps allows to observe the northern sky, but with severe light pollution.
Close to the highest Perseid activity, there is another approach to a calculated 1-revolution dust trail of comet C/1852 K1. A preceding approach is calculated for 2021 August 12 (and still awaits to be observed). The 2022 encounter on August 12, 04h22m UT, has a larger minimum distance between the orbits of the Earth and the comet than the 2021 approach (0.00040 au vs.0.00010 au). Considering only this parameter, the probability of any activity may be lower in
2022, but we do not know the extension and structure of the assumed trail.

Piscis Austrinids (183 PAU)
Active: July 15{August 10; Maximum: July 28 ( = 125); ZHR = 5;
V1 = 35 km/s; r = 3:2.
Still very little information has been collected on the PAU over the years although the shower is in all working lists (and \established” in the IAU list). Details on the shower are not well confirmed, mainly because of the large amount of northern hemisphere summer data, and the relatively small number of southern hemisphere winter results, on it. View in the West, above Saturn and below Fomalhaut, before sunrise as early as possible. 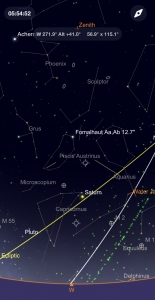 Southern -Aquariids (005 SDA)
Active: July 12{August 23; Maximum: July 30 ( = 127); ZHR = 25;
V1 = 41 km/s; r = 2:5 (see text).
The shower belongs to the most active sources in the southern hemisphere. Radio work can pick up the SDA as well, and indeed the shower has sometimes given a surprisingly strong radio signature. Data collected by experienced observers under exceptional conditions in 2008 and IMO INFO(3-21) 13 2011 show that the maximum ZHR of the southern -Aquariids is around 25 for about two days. The ZHR exceeds 20 between  = 124 and 129. During the maximum
there are numerous bright SDA meteors visible, causing r  2:5 around the maximum and r  3:1 away from the peak period. In the past there were also outbursts observed: Australian observers reported a ZHR of 40 in the night 1977 July 28/29; again a ZHR of 40 was observed for 1.5 hours on 2003 July 28/29 from Crete (the ZHR before and after the outburst was around 20). Unfortunately, the 2003 observation was not confirmed by other observers active in the
period. The extensive 2011 data set showed no ZHR enhancement at the same solar longitude as in 2003. The activity level and variations of the shower need to be monitored. New Moon on July 28 is optimal for all optical observations. While at mid-northern latitudes only a small portion of the shower meteors is visible, conditions significantly improve the further south the location is.

ANT-Capricornids (001 CAP)
Active: July 3{August 15; Maximum: July 30 ( = 127); ZHR = 5;
V1 = 23 km/s; r = 2:5.
The CAP and SDA radiants were both denitely detected visually in all years, standing out against those much weaker ones supposed active in Capricornus-Aquarius then. Although the radiant of the CAP partly overlaps that of the large ANT region, the low CAP velocity should allow both video and visual observers to distinguish between the two sources. Frequently, bright and at times reball-class shower meteors are seen. Minor rate enhancements have been reported at a few occasions in the past. The highest observed ZHR of  10 dates back to 1995. Recent results suggest the maximum may continue into July 31.