Archive for category: Sky of the Month

You are here: Home1 / Sky of the Month 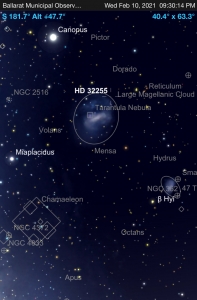 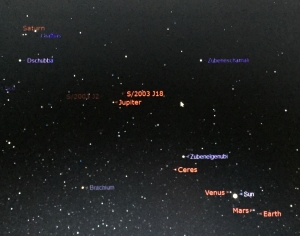 ‘The NASA/ESA Hubble Space Telescope has observed the supernova remnant named 1E 0102.2-7219. Researchers are using Hubble’s imagery of the remnant object to wind back the clock on the expanding remains of this exploded star in the hope of understanding the supernova event that caused it 1700 years ago.

The featured star that exploded long ago belongs to the Small Magellanic Cloud, (Ed: now high in the evening sky) a satellite galaxy of our Milky Way located roughly 200 000 light-years away. The doomed star left behind an expanding, gaseous corpse — a supernova remnant — known as 1E 0102.2-7219.

Because the gaseous knots in this supernova remnant are moving at different speeds and directions from the supernova explosion, those moving toward Earth are colored blue in this composition and the ones moving away are shown in red. This new Hubble image shows these ribbons of gas speeding away from the explosion site at an average speed of 3.2 million kilometers per hour. At that speed, you could travel to the Moon and back in 15 minutes.

Researchers have studied the Hubble archive looking for visible-light images of the supernova remnant and they have analysed the data to calculate a more accurate estimate of the age and centre of the supernova blast.

According to their new estimates, light from this blast arrived at Earth 1700 years ago, during the decline of the Roman Empire. This supernova would only have been visible to inhabitants of Earth’s southern hemisphere. Unfortunately, there are no known records of this titanic event. Earlier studies proposed explosion dates of 2000 and 1000 years ago, but this new analysis is believed to be more robust.”